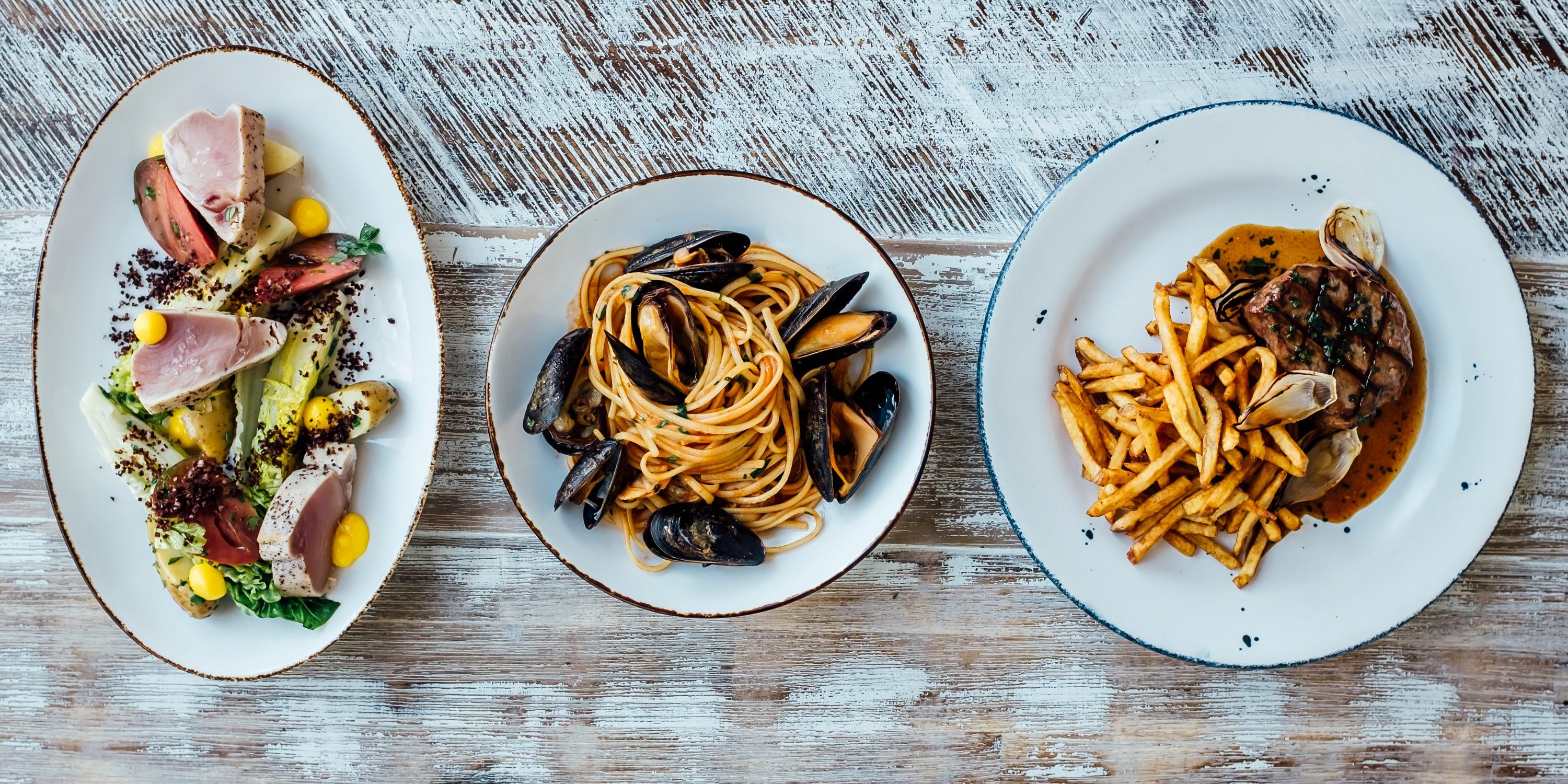 It’s been only 3 months, we already have 30+ new Vancouver restaurants, and they all seem worth checking out! Please email us at info at foodiepulse.com if you have more to mention!

Aleph Eatery [Grandview-Woodland] is located at 1889 Powell Street, with East Van’s backdrop of train tracks, mountains, brick streets, and water. It is a re-creation of Palestine (AKA home) through the eyes of the husband-wife team: Palestinian born Lebanese chef-owner Haitham El Khatib and his native Vancouverite wife, Fiona.  Aleph’s menu draws both its identity and innovation from the staples of a Middle Eastern pantry to serve up brunch and lunch in East Vancouver. @alepheatery [DailyHive]

Assembli [Coal Harbour]  has opened their 2nd location at 1066 West Hastings. The custom-made pizza and salad joint specializes in meals that are fresh, fast and good for you. What makes them different than other eateries is you can build your very own pizza or salad for one set price. To make it even more awesome, they have over 50 ingredients to choose from. @myassembli [604Now]

Autostrada Osteria [Riley Park] is located at 4811 Main Street, and is the latest establishment by chef Lucais Syme. Taken its name from the Italian word for “highway”, the Italian eatery is run by Syme and his business partner, Dustin Dockendorf, whose résumé includes positions at Joey’s and the Beach House. It’s small (24 seats) and is sparsely decorated with a mural of a racing car. And it puts the spotlight on what Syme does best: simple but expertly executed share plates and pasta dishes, the kind of cuisine that’s served without fanfare all over Italy. [Straight]

Balila [Gastown] is a completely dedicated to hummus at 49 West Hastings Street. Named after Balila, a traditional Lebanese dish made of cumin and chickpeas. The 1,000 square foot and 16-seat Mediterranean restaurant offers 10 different kinds of hummus dips and “to-die-for” hummus wraps, along with soups, salads, and full rice or burgol-based meals too. @balilahummus [DailyHive]

Blenheim Pub, The [Kitsilano]  has taken over the Displace Hashery‘s spot at 293 West 4th Ave in Kitsilano. The new sports bar and family restaurant is owned by Bauhaus’s Uwe Boll  @theblenheimpub [Vancouver Is Awesome]

Bluhouse Market & Cafe  [North Vancouver]  is a coffee bar, cafe, and shop can be found at 101-173 Forester Street in North Vancouver, a restored heritage building. They offer fair trade organic coffee and sources from local farmers. Crepes and smoothies are made to order. Meat and vegan options are available. Open Mon-Sun 8:00am-6:00pm.@bluhousecafe [Vancovuer Foodster]

Coquille  [Gastown] has opened doors at 181 Carrall St in Gastown and replaced Secret Location. Run by L’Abattoir chefs Lee Cooper in the heart of Gastown, the 4000 sqft fine seafood restaurant also has a 30-seat patio and is one of the most highly anticipated restaurant opening in early 2018. @coquillevan [Scout] Dominion Bar + Kitchen [Surrey] is located at 13475 103 Avenue, Surrey. This new social hub is located in the lobby of the Civic Hotel, which is all about celebrating the idea of ‘Unity in a Community of Nations’, serving flavours from across the nation. Dishes like Bao Macs (mini cheeseburger in a Chinese-style open-side bun) and Jäger Chicken (marinated in Jägermeister and served with German spaetzle noodle dumplings) will be up for order.@DominionSurrey [DailyHive] La Taqueria [Mount Pleasant] has opened its sixth shop at 2521 Main Street, formerly occupied by Miura Restaurant and Bar.  The1,100-square-foot space features 30-foot-high ceilings, handmade tiles imported from Guadalajara, imported from old houses built in the 1800s and 1900s.  A newly introduced bar program will be available including beers on tap and signature cocktails that will make use of tequila, mezcal, and sake. Homemade nachos will also be on offer for the first time. @lataqueria [Straight]

Lunch Club [Arbutus Ridge]— 3008 Arbutus Street has quietly opened the doors at 3008 Arbutus Street. Besides the interior of this eatery has a lot of pink,  they also have a ton of too die for breakfast and lunch items too.@lunchclubeats [DailyHive]

Meet Yaletown [Yaletown] has opened its third location at 1165 Mainland Street, specializing in serving plant-based offerings in a cozy atmosphere, a new vegan and gluten-free spot in the chic Vancouver neighbourhood. [DailyHive]

Moltaqa Moroccan Restaurant [Gastown]has taken the spot of the former ACME Cafe at 51 West Hastings Street, serving food inspired by the simplistic beauty and health benefits of the food of Morocco, a cuisine that is known for its use of spices, according to their social media.  @moltaqa.vancouver [Vancovuer is Awesome]

Mr. Mustache  [Burnaby] has opened their new location at 110 – 6125 Sussex Ave, Burnaby.  The city’s latest bubble tea and dessert house is well-known for their black and green tea, milk tea slushes, and sparkling teas. Their signature drink, however, and possibly their most popular beverage, is a tea macchiato – a tall concoction that’s equal parts aesthetic and tasty.  @mr.mustache_milk_tea [DailyHive]

Pitchfork [Kitsilano]–has opened doors at 1941 Cornwall Avenue as the new plant-based eatery in Kits,  replacing another vegetarian restaurant that formerly operated in the space, Planet Veg.  Patrons who head here can anticipate a menu with brunch, small bites, mains, and dessert items – all vegetarian, and most with vegan substitutions as well.  @pitchforkveg[DailyHive]

Pie Hole, The [Burnaby]has opened their Burnaby location at 7832 6th Street. Know for their always-tempting array of sweet and savoury pies, The Pie Hole is the baked goods baby of Jenell Parsons, who launched the business a few years ago in partnership with her sister, Carla. @thepiehole [Vancouver is Awesome]

Ramen Koika [West End]has welcomed its 2nd location at 1479 Robson Street,  the former location of Hapa Izakaya.  The new Robson location will be larger at 1,700 square feet and will seat up to about 40 people. While the restaurant will be entering the most competitive ramen hot-spot in the city,  they have claimed to offer a menu with different items that help to set them apart from the others. [Straight] Sopra Sotto Italian Pizzeria [Gravnview/Commercial Drive] is the new oven-baked pizza and pasta joint at 1510 Commercial Drive, with a second location in the works for Burnaby Heights. Sopra Sotto’s goal is to create comfort food that Italians would find at their nonna’s home.  @soprasotto.vancouver [604Now]

Sweet Somethings — has opened doors at 4321 Dunbar, offering more than just things that are sweet – there’s something savoury, something sweet and some artisanal coffee. @sweetsomethingsvancouver [Vancouver Foodster]