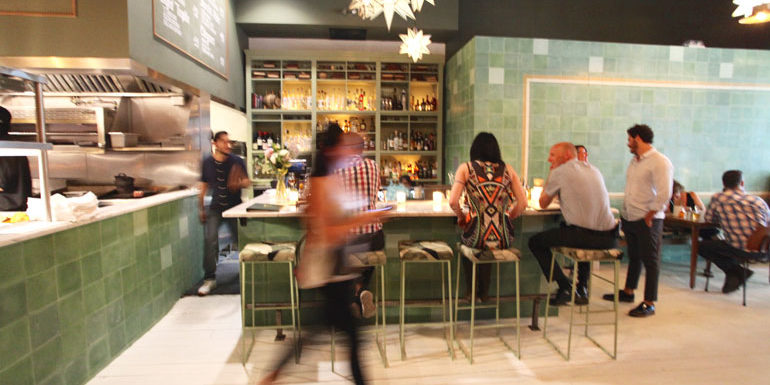 Here are the new Vancouver Restaurants opened in July… La Mezcaleria [Gastown]  has taken over the Nicli’s Next Door space at 68 East Cordova. La Mezcaleria is the first restaurant in Vancouver to offer a wide variety of the finest mezcals, and also provides high quality tequilas and cocktails inspired by the different regions of Mexico. The dishes mirror traditional mexican recipes while sourcing organic ingredients locally and serving ocean-frienldy seafood options. [Scout] Opened

Raisu [Kitslano] is a new Japanese-inspired eatery from the restaurant group behind Kingyo, Suika and Rajio, and has opened at 2340 West 4th Avenue. Similarly to its sister restaurants, Raisu boasts a hip and stylish dining space for tapas-style Japanese fusion food and drinks. [DailyHive] Opened Tacofino [Yaletown] will welcome their fans and new friends with  a 40-seat dining room, a 16-seat patio, a full bar, and a take-out counter similar to their Gastown “Burrito Bar”. The restaurant will take over the space that was formerly Salad Works (1025 Mainland). [DailyHive] Opened

Poké Time [Westend]  is owned and operated by husband and wife duo Johnny and Sandra, Poké Time  is located at 1258 Robson Street and slated to open mid-July and will offer traditional style poké as well as other Hawaiian classics. [DailyHive] Opened

The Captain’s Boil [Richmond] Inspired by 70’s Asian Fishermen on the US Gulf Coast taking the traditional Louisiana Creole crawfish boil and enhanced the recipe with Asian aromatics – lemon grass, ginger – serving it with garlic butter and a blend of Asian spices, the Captain’s Boil opened their first outlet in Toronto to bring you this fresh, flavorful, and fun experience. And they are coming to Richmond, BC at 1226 – 8338 Capstan Way. [Facebook] Opened

Cartems Donuterie  [Kitslano] The new 1600 sqft space is at 3040 West Broadway offering 30+ seats with the same basic set up as the Main Street location –  beans from Elysian Coffee, scoops from Earnest Ice Cream, and the assortment of doughnuts including the popular Canadian Whisky Bacon, Salted Caramel, and Earl Grey) [Scout] Opened

Lucky Taco [Kitslano], a new 36-seat restaurant (including a 12-seat patio) that has replaced Supermarine  at 1685 Yew Street in Kits, with its simple cantina approach, offering vibrant tacos in a fun and friendly environment. They open late at night until 2am. [Scout] Opened

Mensch. Jewish Delicatessen [Fairview] has taken over a vacated market/butcher shop at 666 East Broadway (at Fraser Street), and will be running a summer lunch-only shop from July 18 to September 9, 2016. Open from 11 am to 3 pm, serving their signature hot pastrami and a Reuben on rye, beet-cured lox on a poppyseed bagel, and egg salad on challah bread, all with a housemade dill pickle, with sweet lokshen kugel for dessert. [DailyHive] Opened

Please contact us if you are know of any of new Vancouver Restaurants opened that we should cover here.